We at EVP Solutions felt that a ‘Fleet Consultancy Review 2021’ would be an appropriate way to sign off the year from a blog perspective, while we also look ahead to 2022 to see what the future might hold for the fleet industry. Therefore, our fleet consultancy review will be the final EVP blog of 2021.

It has been a strange year, both in the fleet world and generally.

As in 2020, the Coronavirus pandemic has taken its toll on the UK and worldwide. Although, consequences have not been as severe in the UK as in 2020.

Luckily, the development of vaccines has meant the UK economy has slowly been able to ‘open up’. Thus, allowing businesses to trade in a manner closer to the way they did before Covid-19 began.

In the UK, the vaccine rollout has recently been praised in a Covid report by MPs. However, Covid is still present, and we do not know the long-term impacts.

It would feel inappropriate not to begin this blog analysing the impacts of the Covid-19 Pandemic.

The UK was in total lockdown until March, with measures as strict as they were in the height of the pandemic in 2020.

Due to the Government’s lockdown restrictions, individuals were made to work from home wherever possible. Furthermore, there was a ban on all unnecessary travel. Naturally, this meant that vehicles were spending far more time on people’s drives, and there was a significant reduction in mileage.

The semiconductor shortage is a side-effect caused by the Covid-19 pandemic. When demand was unknown, some companies kept ordering the semiconductors. On the other hand, some ceased orders and now cannot order the volume of parts they require.

Ultimately, the semiconductor shortage has led to less vehicle manufacturing. According to the Society of Motor Manufacturers and Traders (SMMT), October 2021 saw a 41% reduction in the number of cars produced compared to October 2020. Subsequently, there have been price increases in both new and second-hand vehicles. EVP Solutions can provide your organisation with expert consultancy, which will optimise your asset utilisation.

Another issue of 2021 has been the HGV driver shortage, which is still an issue on the release of this blog. There are numerous reasons why there is a shortage of drivers.

According to the Road Haulage Association survey, the most important factors to the driver shortage are shown in the table to the right.

As the table shows, driver retirement and Brexit are the leading factors causing the driver shortage.

The average age of an HGV driver is 55, with less than 1% of drivers are under the age of 25. Clearly, there is an ageing workforce and young people are opting for other industries.

Brexit was also considered one of the most critical factors impacting the UK’s HGV drivers. Pre-Brexit, the UK had many European drivers running HGVs on behalf of businesses in the UK. However, after the UK left the EU, many HGV drivers chose to return to their home countries or work elsewhere.

What was done to ease the shortage?

There has also been relaxation in HGV driving tests. For example, tests for car drivers to tow a trailer or caravan have been eased to free up 30,000 more HGV driving tests. Moreover, the test has been made shorter, with the removal of the reversing exercise. Uncoupling and recoupling exercises is also no longer part of the test. There has, however, been industry and public criticism in the decision to do this, those parties arguing that this will lead to drivers being unsafe.

Whether these measures will be significant enough to ease the HGV driver shortage in the run-up to Christmas is still to be seen.

EVP Solutions can offer your business supply chain management and mitigations, should you require it.

The fuel shortage was a side effect of the HGV driver shortage. Like other sectors such as retail, petrol stations have struggled to receive the amount of fuel that they would usually. Compounded with the UK public’s panic buying, some fuel courts were forced to close.

One particularly comical moment was when Sky News was interviewing a motorist in London. When asked why she was queuing for petrol by the reporter, she responded that she was ‘only queuing because everybody else is’. Although funny, it did demonstrate why there was panic buying of petrol and diesel, and therefore the fuel shortage.

Because of the short supply, the cost of fuel invariably rose significantly. For example, in September, the average price of a litre of petrol and diesel meant it was on average £12 more expensive to fill a tank than in September 2020, demonstrating the steep price increase implemented onto fuel.

While interesting, what did all these price increases mean for fleets?

Firstly, as fleet operatives were forced to buy petrol wherever they could, rather than looking to buy their fuel cheaply, many fleet’s running costs increased. This demonstrates why it is paramount that a fleet management strategy is in place for organisations, which is where EVP can step in.

Additionally, I know many Electric Vehicle users who were very smug over this period – no additional queuing or costs, just charging their vehicle as normal!

The move to electric

2021 has also been a year of movement. Now, more than ever, both fleets and the wider public are identifying that they need to begin making moves (whether that is planning or implementation, or anywhere in between) towards electrifying their vehicles.

Much of EVP’s fleet consultancy work during 2021 has been reviewing Clients fleets to make the move to EVs.

The end of 2020 saw Prime Minister Boris Johnson announce that the ban of the sale of petrol and diesel would be moved forward to 2030, from the originally scheduled 2040, hybrid vehicles will be on sale until 2035. Therefore, any previous plans now need to suit these dates.

The table to the right, taken from the SMMT, shows data for the number of new car registrations for 2021 up to November.

The data shows a clear shift in the type of vehicles produced. The traditional ICE vehicles (diesel and petrol) have fallen in registrations by more than 60%. On the other hand, Battery EVs and Plug-in Hybrid EVs have almost doubled compared to the same point in 2020. From an environmental perspective, these are positive statistics and shows people are opting for EVs instead of ICE vehicles

The move to electric vehicles is inevitable for everyone in the near future. To put it into perspective, we are now closer in terms of time to the 2030 ICE ban than we are to London 2012!

If your organisation needs advice on making the move to EVs, please take the time to look at our Electric Vehicle Consultancy services 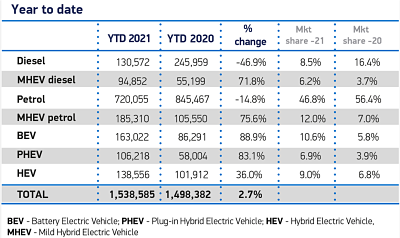 What is likely for 2022 in the fleet industry?

Firstly, feedback from certain manufacturers suggests that the semiconductor shortage will continue to affect supply throughout 2022. Some have even suggested the shortage will impact supply in 2023 too. However, there is hope that new production plants, such as a €1 billion facility in Germany, will continue to open and produce more semiconductors.

Fleet Managers will have their work cut out for them when it comes to re-contracting. Previously, many employees would cover 50,000 miles plus in a year. However, those same people may not opt to work either remotely or in a hybrid manner. Ultimately, this will make re-contracting more difficult, as estimating mileage will not be as clear cut as it once was.

As mentioned earlier within this blog, there is certainly no doubt that electric vehicles will have a continuously growing role in the future of fleet. However, the closer we come to the 2030 deadline, the more difficult the transition will become. Therefore, the EVP message is to be proactive and at least plan the move from ICE to EV. Businesses that fail to do so will undoubtedly incur unnecessary costs.

Finally, we felt it would be nice to round off our blog for the year with a short final update from us at EVP Solutions.

It has been a brilliant year for the business. Despite the early uncertainty caused by Covid-19, EVP has continued to grow. As a result, we have had one of the best years of our 5-year lifetime.

Recruits Angela Heneghan and Dave Cunliffe have settled well into the business alongside Alex Baker’s project support. They all play a key role within EVP, alongside our ever-present directors Andrew Cronin and Nick Jones, whose excellent fleet knowledge and skills have allowed EVP to grow into what is has become today. To see some of the Clients we have worked with this year, please head over to our website or look at one of our newsletters.

In December, EVP also had the chance to go out for their Christmas party. The team firstly went to play some Shuffleboard at the Gasworks bar. Next, we had a lovely meal at the Hawksmoor Restaurant.

Thank you to our Client’s for providing us with the opportunity to improve the efficiency of your Fleets.

While we also thank our readers for reading our fleet consultancy review of 2021 and hope you have enjoyed our content this year. 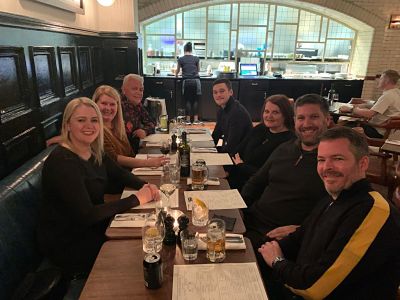